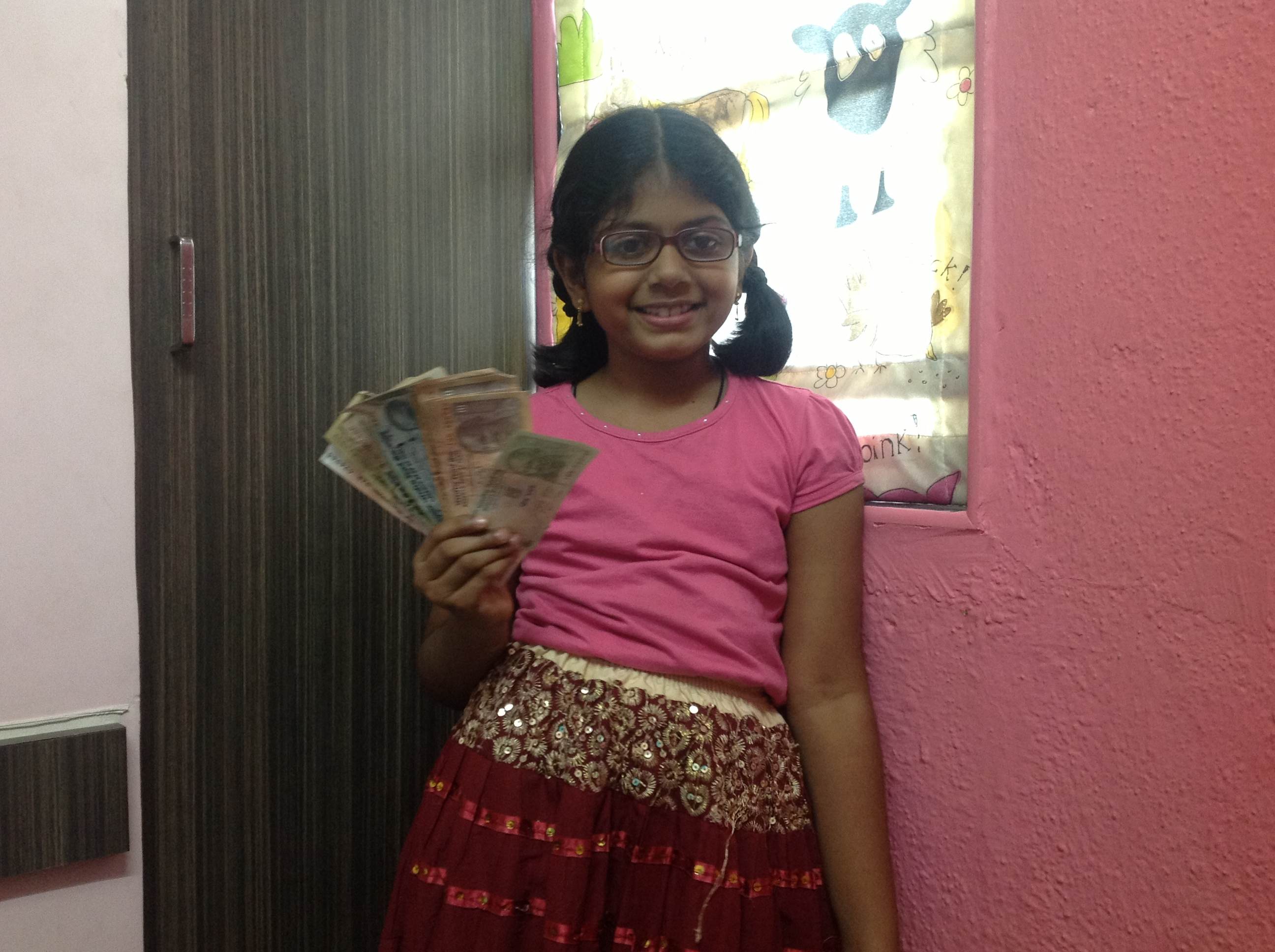 Have you heard a 9 year old say “I wasted Rs 1,000 on buying a necklace and on eating out” The moment I heard it from my neighborhood friend, Srilekha Arun’s daughter, Pranati, I knew I had found the first money savvy kid for my blog.

Given her age, Pranati, could have spent the money on a doll set. She could have dragged her mom to a mall to buy new dresses for birthday parties or she could have treated her friends at a pizza or a burger joint.

Instead, she chose to put the money back to work, in her piggy bank. This was the money she earned by hosting a game show with the help of her mom and dad, not to forget her naughty little brother, Pradyut.

A game show managed by kids!! Aren’t kids meant to have fun? Surely all this money saving morality can come up when they’re older! Besides, how will we ever get them to stand at a stall?

Well, it all began out of boredom.  Every winter our building hosts an annual fun fair. Kids across age groups usually dance to popular bollywood numbers, families come together, eat together and a play a “housie”, “bingo” or some such draw based game. Last year, Srilekha decided to do something different. She thought of buying a stall and hosting a game show. She engaged her daughter in each and every aspect of it. The deposit money of Rs 500, for putting up a stall and overhead costs of Rs 300 for buying prizes and putting banners for game show came from Pranati’s piggy bank.  The young girl helped her mom decide the three games, she painted the banners to attract her friends and their parents to her stall. She stood at the stall for two hours as people came and enjoyed the games. She got the fruit of her labour, Rs 2800 cash earned by charging Rs 10 for each of the three games.

That fun fair, changed Pranati’s approach towards money. You can see that in her attitude when you ask her what she did with her prize money. She says she  “wasted” instead of “spending” Rs 1,000 of the total amount.

She recounts her experience of being a game show host.

“On the day of the fun fair of my building, I opened a games stall. For booking the  stall we had to give Rs 500. In the evening I was excited and nervous too. I  wasn’t sure if my friends would come to my stall. There were three games and each one costed Rs 10.  As my friends started coming to play the games some of them came again, I thought we have earned close to Rs 1 lakh rupees. I enjoyed it a lot. I was very tired of standing at the stall. I learnt that doing a job and getting money after a job are very difficult things. Maintaining a crowd is very tough”

While the young girl surely has an idea about earning, job and income, Srilekha says that the whole process of hosting the show, attracting people, managing it has taught many more long lasting lessons to her daughter. Here are the four lessons in mother’s words.

1 “Spend within your means”

While there is no concept regular pocket money in our house, Pranati would usually spend the money she got as a prize in school or as a gift from grandparents. She wouldn’t really bother to know or ask how much her things cost. But the game show changed that attitude. Whenever she is out for shopping with me, she asks or checks the price of the things she wants. The cash gifts like the show money go in to her piggy bank. Now that she has earned it she doesn’t want to spend it so easily

2 “The concept of doing something, taking risks and making profits”

The simple concepts such as why we need to put a price tag to each game, how much money we need to make to be successful in this game, what do we lose if nobody comes to our stall, were easier for Pranati to understand once she was part of it. She came up with the idea of searching green peas with a chopstick game. Once the game show was over, it was easier for me to explain the money concepts such as capital (Rs 500 stall fees), the overhead costs (Rs 300), our total earnings (Rs 2800) and our profit (Rs 2000) 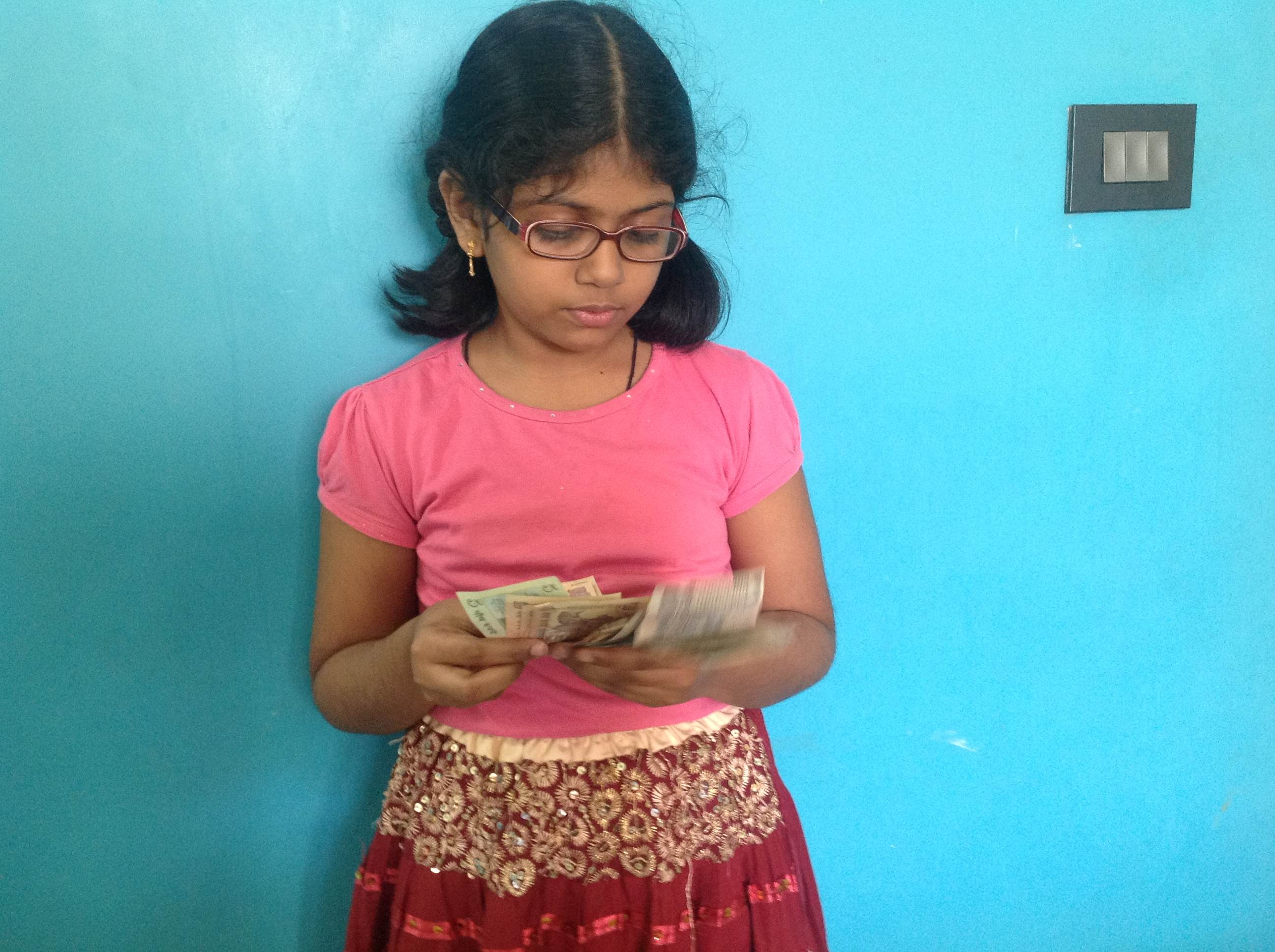 We decided to keep Rs 10 each for three games and if anyone wanted to play all the three games, we offered it at Rs 25, a discount of Rs 5. Pranati understood that people had to be encouraged to play three games and that’s how we could earn more.

Some of our neighbors came with Rs 50, Rs 100 notes. While handing over the balance money to them, Pranati saw the coins of various denominations. She got to know that money transactions can be done not only with rupees but coins also. When we returned home and counted the rupees and coins, she added it up to Rs 2800 and understood that how much more it will take to earn Rs 1 lakh.

The next step as I was discussing with Srilekha , was to open a bank account for her daughter.  She already had one in her name with a (particular) public sector bank. But the 9 year old girl was clear about her choice of a bank also. She interrupted and said “I want an account in that particular (names a private sector) bank”

Srilekha is doing her bit to make her children understand about money and its value, are you doing something similar? Do write to me at thegreatgruhini@gmail.com

Rachna aka your Great Gruhini is a finance writer with over a decade's experience in writing about personal finance matters with leading financial publications of India. As she studies to be a certified financial planner, she is also on a mission to make every woman a money savvy individual. So shed your inhibitions. Get over your money worries with The Great Gruhini. Write to her at thegreatgruhini@gmail.com
@thegreatgruhini
Previous Introduce your Children to Secret Millionaires Club
Next The Great Gruhini’s Guide to Chasing Your Dreams

Last December, Asmyta Tiwari understood the real meaning of independence. Within a month of turning …