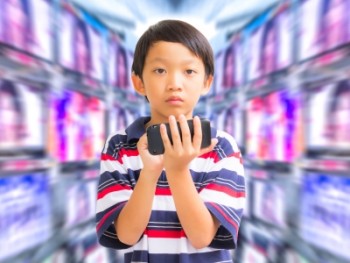 Teenage is when our children want to assert their independence the most. As a parent, we constantly struggle to decide how much independence is enough. For some like my friend, Sangeeta Sharma Bawa, the scope of independence is narrow as her 14 year old daughter Rhea doesn’t have access to Facebook. Sangeeta fears that once she gives her social media access, her daughter will get exposed to content not appropriate for her age. Her biggest fear is the school gossip that takes place on the school’s Facebook page which could affect her daughter’s self confidence, leave alone the distraction it causes. In doing this, Sangeeta, a stay-at home mom has addressed the problem at its root-no social media access, so no hassles of monitoring her online activity.

However for some moms like Noopur Raghunath, the realization that she probably gave too much independence to her 9 year old son came last year when he had to wear glasses due to his addiction to tablets. His son isn’t alone. At their social gatherings in Dubai where they live, all that her friend’s kids do is to exchange games on their smart phones or tablets. Charging the tablets just before heading to a party is a must do for these kids, says Noopur. She heard stories of how her friend’s kid got abused on a online chess site.

So what did this mother do? Instead of taking away the tablet and curbing the independence of her son, Noopur went ahead to launch eKAVACH, a mobile application that allows parents to protect and monitors the kid’s online activity through their smart phone or tablet. This is how this app can help you decide how much independence to give or not.

A prerequisite to download eKAVACH App: You probably need this app if your kid has his own phone or a tablet. eKavach has two versions: a parent version that you download on your phone or tablet. The child version is to be downloaded on your child’s phone or tablet. It looks like this app will be smarter than the kids. The child version won’t get deleted as it has a password decided by you.

However if your child uses your tablet or phone only, the parent version will work but the notifications and alerts will also appear on the same phone and at the same time when your child is using it.

It allows you to set internet browsing time limits. Let’s say on certain days, your child wants to access it for longer hours so you can increase the browsing time for that day. The app also sends out categorized alerts like urgent notification asking you to access or deny or alerts or general info on what have they been browsing.

Coming soon: eKAVACH Social: The best is yet to come. Noopur says that another version of the app will track the facebook and twitter activity of your kids. If someone outside your daughter’s circle sends her a FB request, you will probably get an alert message. Yet another version will track whether your kid actually went to the tuition class based on the location and the time data that you give.

Monitoring is free for now: You need not pay anything to download this app. But post October 5, it will become a subscription based app. So download it now from the Appstore (for iphones) or Google Play Store (for android phones) to see if it really works for you.

This app won’t download on my four year old’s Spiderman flip phone, so I can’t test it to see if it really has all the features it claims to have!

Share your feedback about this app by writing to us at thegreatgruhini@gmail.com

Rachna aka your Great Gruhini is a finance writer with over a decade's experience in writing about personal finance matters with leading financial publications of India. As she studies to be a certified financial planner, she is also on a mission to make every woman a money savvy individual. So shed your inhibitions. Get over your money worries with The Great Gruhini. Write to her at thegreatgruhini@gmail.com
@thegreatgruhini
Previous A Ready Reckoner of E-Filing Portals
Next Money Lessons from our Freedom Fighters

When its Sunny, Have Fun with Money

Gruhinis Are you ready for the summer holidays of your kids? If you are still …